Will Constellation Brands’ sell off continue as CEO insists it is undervalued?

Constellation Brands, Inc (NYSE:STZ) has been a very defensive name despite the stock market woes. The stock traded above $260 on December 02, 2022, its highest price ever, also hit in April of the same year. But as 2023 approached, the stock was under the control of the bears. The stock has now lost 15% in a month and trades at $210. Its CEO Bill Newlands believes the stock is a bargain at the current price, and the company would be “silly” not buying back.

In case you might be interested, Constellation Brands is America’s largest bear import company by sales. It also ranks third in market share among the major beer suppliers. Investors have always held this stock which has been regarded as very defensive during tough times. Zacks Research assigns a PEG ratio of 1.77, less than the Beverages – Alcohol industry ratio of 1.94. That means that investors may view the stock as relatively undervalued compared to the industry.

Reflecting on the recent selloff, Newlands says the stock selloff is an “over reaction” to the company’s reported earnings. That was after the company generated an adjusted EPS of $2.83 in its latest quarter, below estimates of $2.89. The EPS was also lower than $3.12 last year. Still, Constellation grew net sales by 5% to $2.44 billion or £2.05 billion. The sales topped $2.38 billion or £2 billion estimates. We believe this stock is attractive, but a key level must hold to buy now; otherwise wait. 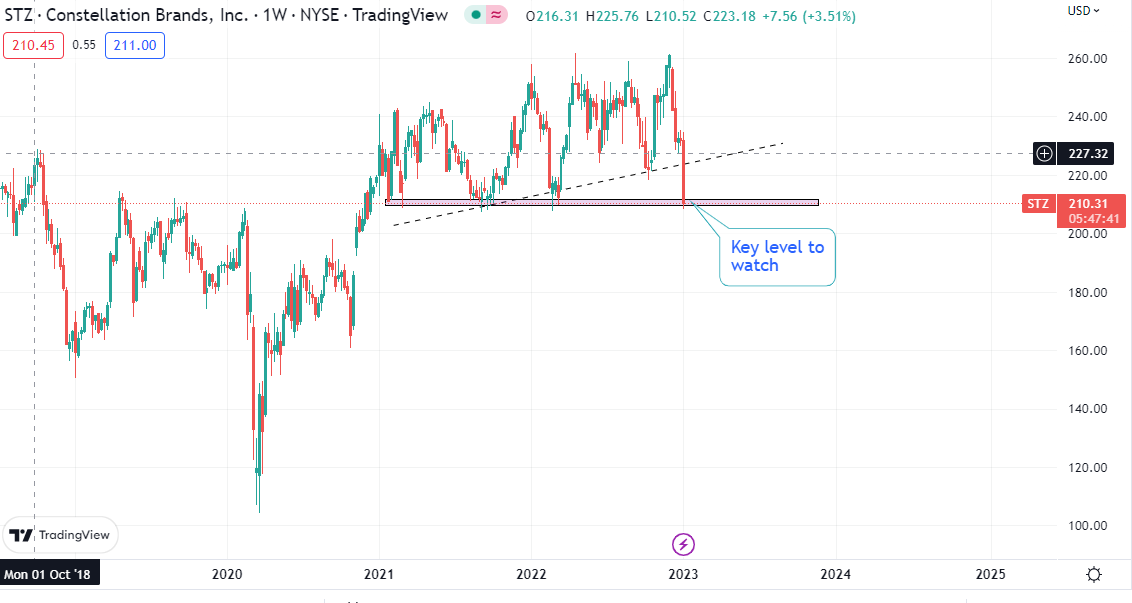 From the weekly chart, Constellation stock trades at a support zone of $210. The stock lost a key ascending trendline. However, at the current price, the stock could gain stability. The stock has held to this key level for 2021 and 2022 and could be a target for buyers.

$210 is the level to watch to buy STZ. If this level holds, followed by a bullish signal, you should consider investing in the defensive stock.

The post <strong>Will Constellation Brands’ sell off continue as CEO insists it is undervalued?</strong> appeared first on Invezz.

Gold at all-time highs in Euro and GBP...

Is Salesforce stock a ‘buy’ after naming three...

This retailer stands to benefit from Bed Bath...

January 26, 2023
Get the daily email that makes reading the news actually enjoyable. Stay informed and entertained, for free.
Your information is secure and your privacy is protected. By opting in you agree to receive emails from us. Remember that you can opt-out any time, we hate spam too!